Most people today are dehydrated.

This isn’t necessarily because we are not consuming enough liquids. More often than not, the amount of liquids we consume are on par with our general needs. The problem is the type of liquids we select combined with poor food choices.

Caffeine and alcohol are over-consumed these days. Both are very dehydrating to the body. In addition, most of the processed foods we consume these days have high levels of sodium (not nutrient rich sea-salt) which strips the body of necessary fluids.

Food and drink are not the only causes of dehydration. Illness (chronic as well as short term) is another frequent reason you or a loved one would find yourself dehydrated.

Dehydration due to illness can be very tricky to manage. If the person who is sick is unable to keep beverages down (due to vomiting), it becomes a real challenge to find something that can quickly and efficiently begin to restore the balance of electrolytes in the body, thus making it easier for the person to hold onto the liquid being consumed. 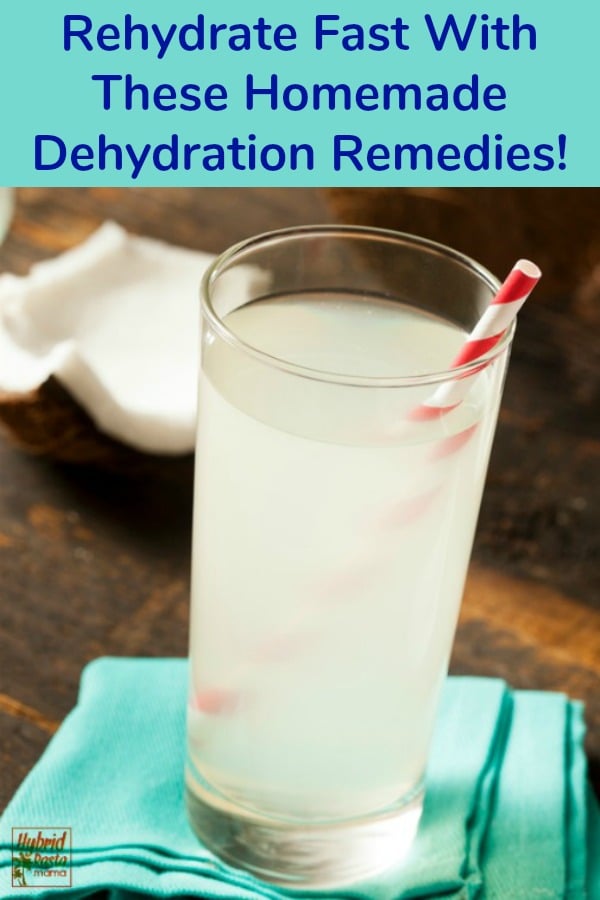 I happen to have a go-to remedy that I love and which never fails me. In fact, it is sort of a two part remedy. Depending on how severe the illness is (vomiting or no vomiting), I might go straight to part two – the big guns – or ease into it with part one.

Before I provide you with my go-to dehydration aids, I would like to remind you to check my post on Dehydration Warning Signs and Herbs That Can Help so you can be more aware of the common symptoms of dehydration.

Let’s take a look at the key ingredients you will be using shall we?

Coconut Water – The Key Ingredient In These Dehydration Aids

Coconut water is a superfood filled with minerals, vitamins, antioxidants, amino acids, enzymes, and growth factors. Thanks to its potassium content, it has a long history of being used both as a simple thirst quencher as well as a deep rehydrating beverage.

One of the most remarkable characteristics of coconut water is its chemical profile and mineral content. The primary minerals or electrolytes in coconut water are essentially the same as those found in human blood. For this reason, doctors have used it as an intravenous fluid for rehydration, pumping it directly into the patient’s bloodstream. Numerous studies dating back over 60 years document the successful use of intravenous coconut water in the treatment of malnutrition and dehydration.

Doctors have also found it to be highly useful in fighting dehydrating diseases such as cholera, dysentery, and influenza, where it has saved the lives of thousands of children in underdeveloped parts of the world. Drinking up to 32 ounces of coconut water per day, at the onset of illness, can often times prevent dehydration. In the case of influenza, it can even aid in soothing an upset stomach, thus preventing a vicious cycle of vomiting and loss of important fluids.

It is important to note that coconut water is low on the glycemic index, so it won’t dramatically affect your blood sugar (great for diabetics), while fluid-replacement beverages like Gatorade and other juice drinks are sweetened with high-fructose corn syrup, a high-glycemic-index sweetener that can spike blood sugar levels and give the bacteria the body is fighting more food, thus extending an illness.

Coconut water is often easier to convince an ill child to drink than plain old water. If you HAVE to, you can flavor it with a little natural juice, but ideally, you will serve it plain, at room temperature. (Too cold of beverage during illness can cause a host of issues).

Real Gelatin – Another Key Ingredient In These Dehydration Aids

Real gelatin, the kind from grass fed cows, offers a whole post’s worth of health benefits. But since I am talking dehydration aids today, let’s stick with that.

Gelatin is incredibly soothing to the lining of an irritated or inflamed stomach, which is most definitely the case during dehydration. Something as simple as consuming gelatin in liquid form can actually stop vomiting dead in its tracks.

Gelatin is also loaded with the amino acid glycine, which helps the liver process out toxins (making it especially effective during a bout of food poisoning or overindulging). When the body is taxed due to dehydration, the liver might not function properly which leads to other issues. Getting some gelatin in your system will help keep the liver working better than without the added support.

Ingredients
100% Coconut Water – plain, no added flavors, sodium, or other ingredients. I like this brand myself.

Directions
Drink the coconut water at room temperature. Start with small sips, working up to several ounces as the body begins to re-balance lost electrolytes.

Directions
Mix one tablespoon of gelatin powder into 8-12 ounces of coconut water. Stir until the gelatin is completely dissolved. Drink over the course of several hours.

These two dehydration aids are so easy it is almost silly right?

Well, I assure you, I have had great success with both! So next time you are going head-to-head with dehydration, give one or both of these aids a try. I promise, you won’t regret it!

If you prefer a more tropic twist on replenishing electrolytes, try my Homemade Tropical Electrolyte Drink. Kids LOVE it! My Watermelon Cucumber Slushies are quite hydrating as well. 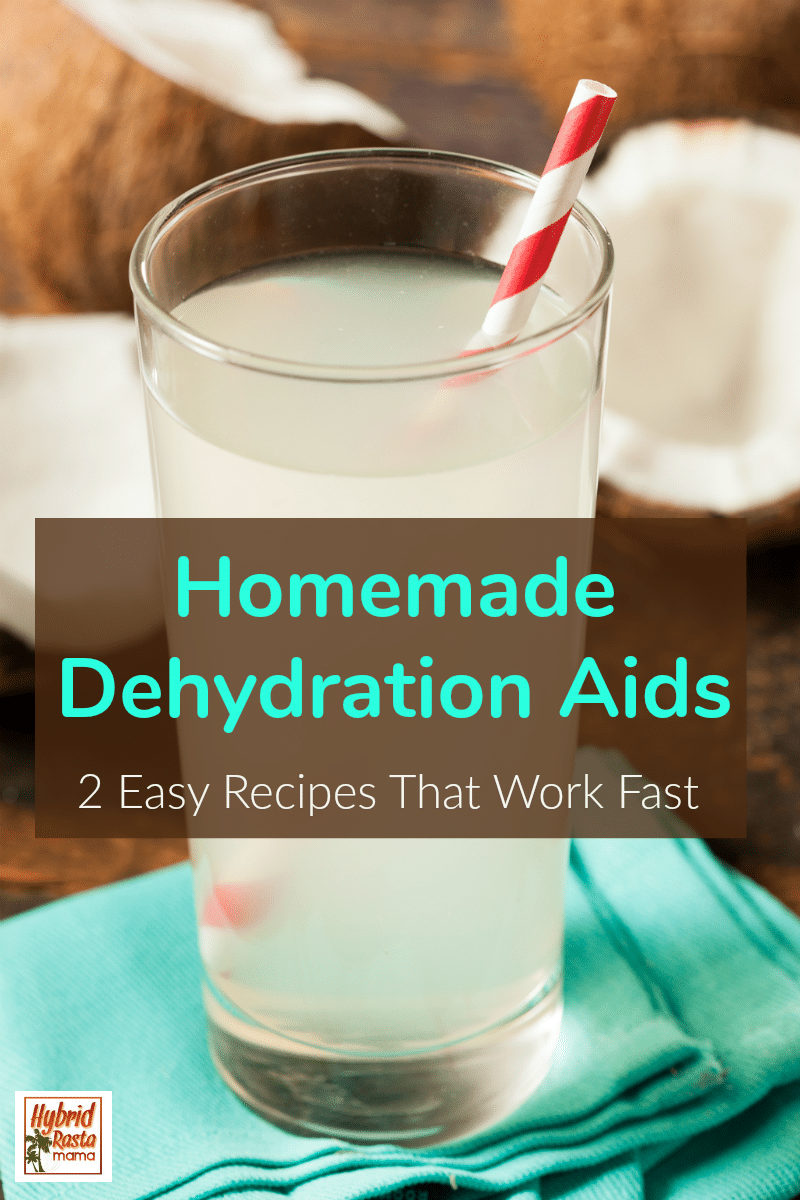